I celebrated my birthday this year on Columbus Day and it has to go down on record as one of the best birthdays I’ve ever had!!!  All because of the love my friends and family have shown and added blessings in the fact that my health results have been coming in with major improvements far beyond what I or my Drs. anticipated!!!!  Thank God for that!  I have two other results I’m waiting on and I’m trusting God that they will be just as good as the others!  Now on to the birthday shenanigans!

My mom blew me away this year!  I said “just gimme the money, I’ll pay a bill!”   She said “No!  Pick something or you get nothing!”  I gave her a list of things I liked (cough … yarn brands I wanted to try) but she believes that I have too much yarn so she nixed that and got me new lenses for my camera instead.  I have a Canon Powershot point and shoot camera that has a lot of features for an amateur like me to continue to work with.  I was going to purchase a DSLR for Christmas but nixed that idea since (a) there’s so much more I can learn on “Kandy” and (b) I got these beauties from Mumsy: 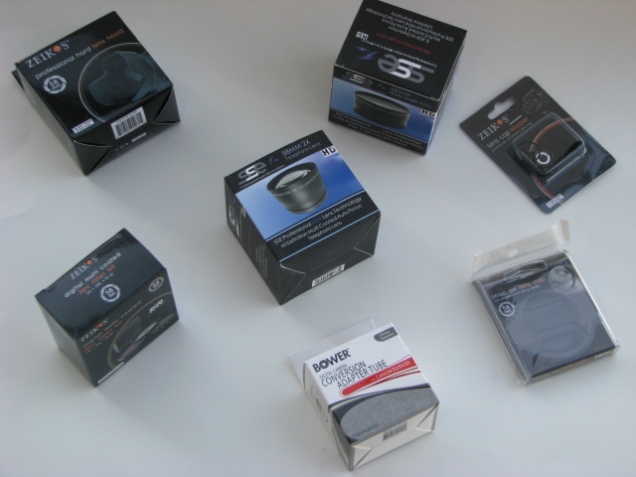 They include: a telephoto lens, a packet of filters, a wide angle lens, a hard lens hood, cleaning solution, additional lens caps, with a carrying case and a mini tripod (not pictured).  I can’t wait to try these puppies out once school is done!

I joined Ravelry for patterns, instead I got wonderful friends.  My newest buddy Megan (who I met through a swap) sent me a surprise package last week Saturday; she wanted to make sure I got the goodies before my birthday.  The surprise included two Diana Krall cds, a card that will only be hysterical to me and her (yeah, we’re corny like that) and  yarn, of course!!!  Errrr …. don’t ask me about the gummies bears … :D.  I’ve always been anti-pink but it’s grown on me in recent times so she served me up some in a wicked shade!  There’s nothing girly about this cupcake!  She’s all woman!!!  It’s KnitPicks Shine Sport in Cosmopolitan! 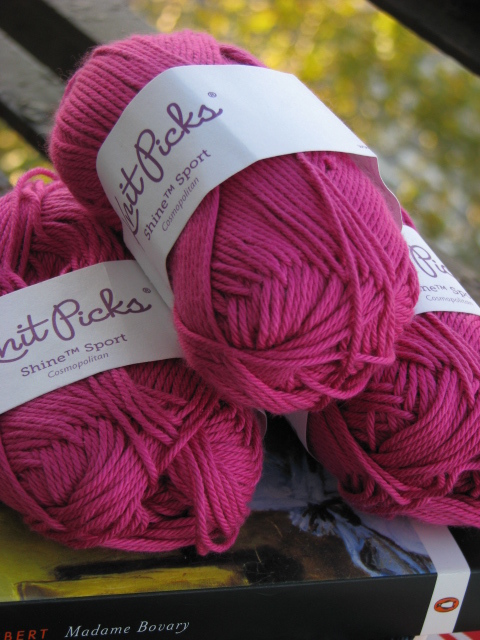 My other bud Beka (from my swap group) also sent me a hysterical card!!!  We have this thing … hard to explain, we find hilarity in the most minute!!!  She also sent me a much needed boost through the encouraging note in the card.  Her wisdom spoke to a lot of things I need to do in the near future; the note was a little overwhelming to say the least!  Sometimes I feel as if I knew these women longer than I really have!  Can I say … knitters and crocheters are some of the very best!!!!

As the week went on, I got more calls, more txts, more messages through the blog.  Hey … I celebrate for the rest of the month, but I didn’t expect anyone else to do so!  😀  My cousin Sabs and I painted the town red on Friday night.  She treated me to dinner at The Hurricane Club.  OMG!!!  The decor, the vibe, the service and the Pan-Asian food  — AWESOME!!!   If you’re ever in town — go there!!!  What made the evening even crazier was that she told them prior that I was having a birthday so they brought my dessert out with a firework candle!  I’m a “behind the scenes” person so it was really overwhelming to have people from other tables and the restaurant staff wish me a “Happy Birthday”.   I thought that was something but the evening got even crazier.

Outside the restrooms of the restaurant were two Italian taps.   From each one flowed two different kinds of rum.  The “Rum Guy” “gave” them to patrons in souvenir sized bottles as a keepsake.  Of course … at the low price of $5.00.  LOLOL!!!  Guess who ended up with one as part of her cousin’s treat for the night —  that’s right — yours truly!!!  😀 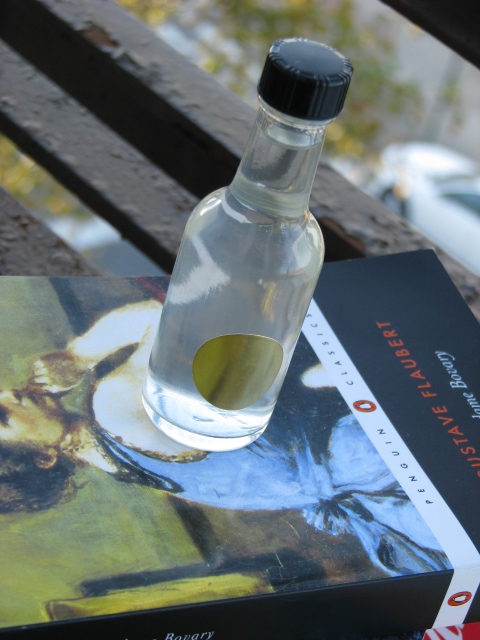 After all that, we decided that the night was still young enough and we were going to treat ourselves to the late night showing of Hotel Translyvania.  Since we had time before the movie started, we went to one of my favourite places — Barnes and Noble.  That trip was hysterical in it’s own right!  I got “macked” by a fourteen year old (he was too sweet, his momma raised him right) and my cousin cursed all the way to the cash register with the craft magazines she got me!  She thinks this stuff is for older women and just doesn’t understand my fascination with all things crafty!  😀  I didn’t care though — she got me these three: 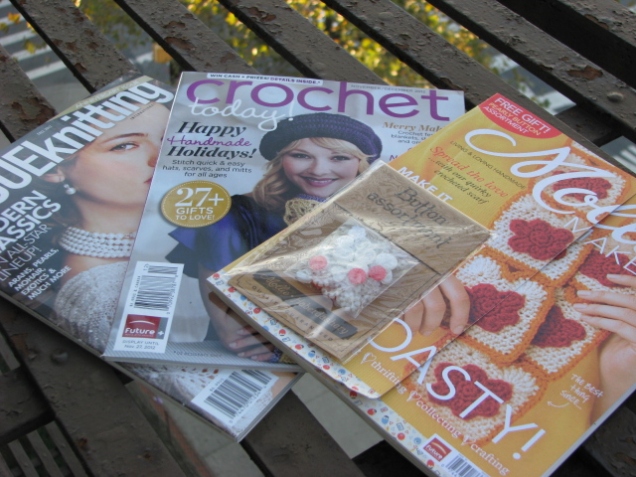 Since I also typically treat myself to a birthday gift, I figured with the good medical results — I’d splurge!!!  I got these beauties to kick off my winter reading (once my current semester’s done): 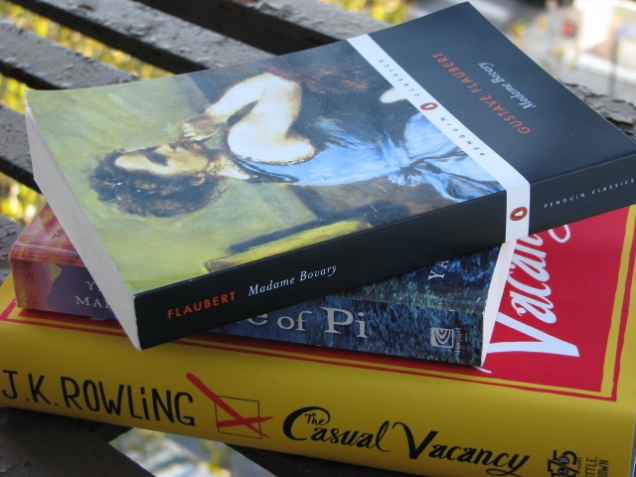 Madame Bovary; The Life of Pi, and Casual Vacancy.   Of course, I had to get my own yarn … well … thread. 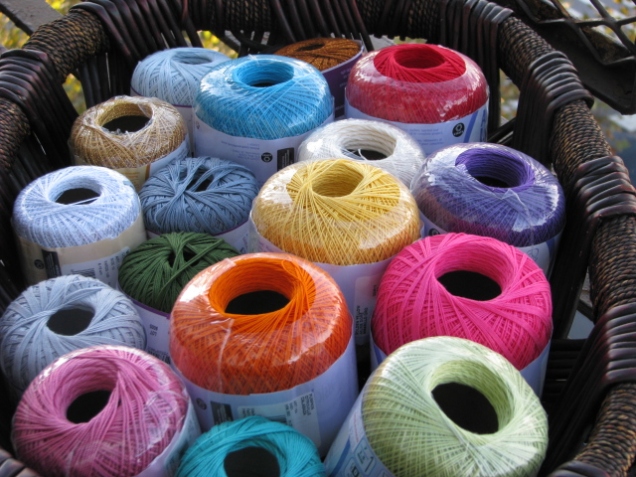 I have this grand idea that I’m going to crochet snowflakes to line the three huge windows in my living room as Christmas decorations — errrr … yeah … we’ll see how that goes!   They’re so pretty though; I know they wouldn’t go to waste!   I made a killing since my local craft store had a sale!

And if the week wasn’t fantastic enough — I came home from my night out on the town Friday night … errrr … Saturday morning 😛  to meet a surprise at my front door! 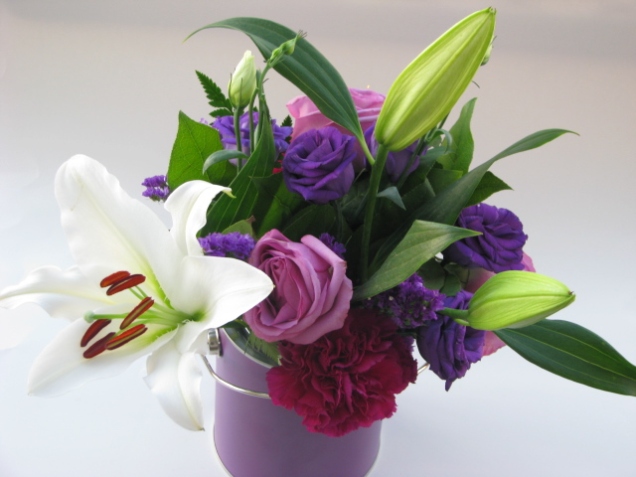 Blooms from my home-slice (does anyone say that anymore?) Domo aka VA-Lovie, in my favourite colour!!!  Purple!!!  She said this is part one, but this was enough!!!  It was a wonderful surprise to end a beautiful night!

Honestly, it’s not because of the gifts that I consider this one of my best birthdays ever!  It’s just the fact that all the expressions — big and small (I even got a card from my dentist … LOL), plus the better than expected medical reports just all culminated into one big ball of love and warm fuzzies that’s made this week extra special and unforgettable!

Now off to find snowflake patterns and a scrumdiddily pattern from Ravelry for my KP Cosmopolitan!  Happy Sunday!  😀