Once a month since the year started I’ve been going to the Brooklyn Botanic classes for installations in a series of apothecary classes.  Since I can’t keep a garden this year, I needed to find something to do which would feed my inner naturalista and these classes absolutely fit the bill.

The first class dealt with cooking and beauty/health oil infusions:  solar and through the application of direct heat.  The samples I did was a solar infused linden flower oil and a cinnamon heat infused one.  The solar one needed a little help when I brought it home.  Given that it’s impossible to feel solar heat in the winter and with this being one of the coldest in history … well let’s just say, solar infusion during this time is a pipe dream.

The carrier oil used was olive oil, but oils like sweet almond, grapeseed, and jojoba oils are also good ones.   For heat infusion, attention must be paid to the smoke temp of all the oils to prevent carcinogenic breakdown and or rancidness of the end product.   In the first class, I started with these:

The linden flower plant properties are such that they can be steeped in water to make tea which is a natural mood enhancer and also a great cure for colds and infection.  However, creating an oil infusion gives you an end product that works well as a rub for sore muscles and eases inflammation.

The cinnamon bark was crushed then added to oil and heated in a pot.  The smell was wonderful … I’d heat it just for use as a natural air freshener, especially during the Christmas holidays.  The oil infusion is used as a topical treatment for fungal infections, or as a rub for relief from rheumatism.

These oils were prepared in class then steeped for two weeks.  The amount produced was recommended for use within two weeks after steeping takes place.  In addition to it being more effective then, without artificial preservatives, creating batches to be used within that time-frame has less likelihood of going bad.  My dislike is that the olive oil overpowers the natural scents the flower and herb produces.  The portions are effective but I need to do something about that smell!

My second class involved the making of salves.  I have to say off the bat, when I posted on Instagram, I got inquiries about recipes and the like — unfortunately, I don’t have any to share.  Our teacher is basically forcing us (not that I need my arm twisted)  to experiment and come up with our own customized recipes.  She brought pre-packaged ingredients, then after giving us general instructions told us when to add what.  Someone thought it was a little shifty, that we should at least have gotten a basic starting point and initially, I thought so too.   But I’m over that now; she’s so passionate about green living, entrepreneurship and experimenting, I couldn’t stay annoyed.  Plus, the class material includes books — a very comprehensive plant dictionary for the first class and DIY recipe book for the second.  Yes … a recipe book but it assumes ingredients instead of starting from the point of infusion.  And it lacks medicinal recipes.  There are a few, but it’s mostly geared towards beauty products.

Confused?  Let’s get to the salves we made in class …

The orange shaded one is made using pepper infused oil, organic beeswax and shea butter.  Our instructor brought the pepper infused oil already made so all we did was add it to the other prepackaged ingredients she brought.  So I’m unsure how much pepper she used, and in the first class, we didn’t crush the pepper but in her mixture, it appeared finely grounded.   The pepper  infused salve is magical (I understand) for arthritis because of the high levels of capsicum in chili and other hot peppers. Did you know the infused oil is exactly what pepper spray is?  But don’t say I told you cause that stuff’s illegal!  LOLOL!   For me to reproduce this, I need to create my own blend of pepper infused oil then find the ratio of beeswax and shea butter blend to create the consistency we got in class.

Less confused by what I mean when I say I don’t have a “recipe”?  😀

The second salve is a highly moisturizing one.  Shea butter, sweet almond oil, vitamin E, and organic beeswax.  The first three ingredients softens and moisturizes the skin and the beewax helps to hold the mixture together solidly.  I’ll definitely be using this one often !

I love the idea of learning how to and using plants and herbs to heal.  Recent health issues make me want to learn and do even more.  I believe traditional medicine has it’s place, but it’s funny how in times gone by herb/plant medicine was traditional medicine, but we’re not going to talk about that in this post.   The idea of learning what to use, creating my own recipes while balancing what I make with traditional medicine and life style changes appeals to me greatly.  Makes me dream big dreams of growing plants, mixing things and sharing knowledge.  So as soon as I create my own basic recipes, I’ll definitely share with you.  I don’t have any choice but to get testing and mad scientist mixing since my mom already ordered the capsicum one and my friends want body butter.  😀

And there you have it.  In addition to knitting, crochet and all the other interests … add mixtress to the growing list.  😀 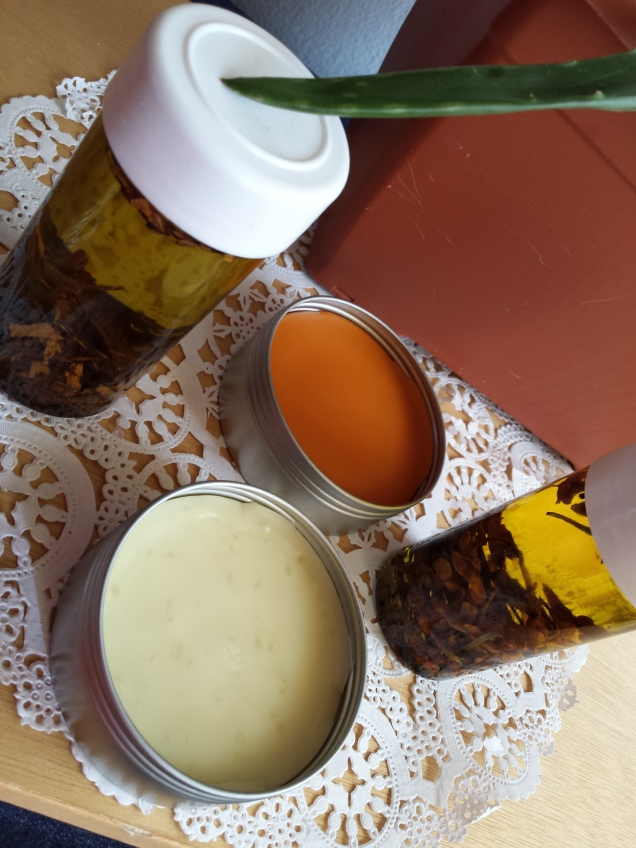 Disclaimer:  I am not a Dr or a certified herbalist.  At this point, I’m communicating information which was shared with me not giving medical advice.

7 thoughts on “The Beginning of Natural Healing:Infusions & Salves”